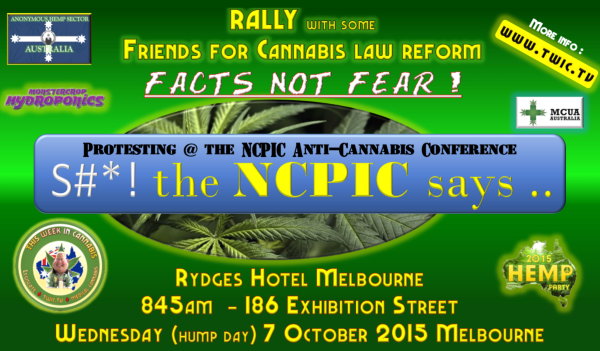 Who Are We  Peacefully Protesting / Rallying Against ?  –
The NCPIC

Who Are the NCPIC ?
The NCPIC – National Cannabis Prevention and Information Centre are part of the Department of Health Australia, their job and mandate, as their name says is to prevent the usage of Cannabis even for medical use of sick children based on per their own words, “With ‘evidence-based’ information”.

So could lies and fake stories still be considered ‘Evidence Based Information’.
Yes, poor quality evidence based information for sure.

Why the Weird Date and Time ?
The NCPIC is having an International Cannabis Conference ($500 a head)  at the address on the card on the day, that is 100% anti-Cannabis (ironic).

Why Are We Protesting-
The NCPIC uses old research, and opinion papers that they or their friends write for them to validate their miss information, some might call it lies. – Please watch their own video and see for yourself what has inspired us, http://bit.ly/ncpic-v1

In the Video it Says Cannabis Withdrawl from Cannabis Addiction, can be cured with Sativex, What is Sativex ?
Pharmaceutical (non natural) Cannabis

But, Is Cannabis Actually Addictive Anyhow  ?
Good question, glad I asked. The definition most commonly accepted by addiction experts is a boiled-down version of the one laid out in the Diagnostic and Statistical Manual of Mental Disorders (DSM-IV TR), psychiatry’s handbook of all mental conditions. By the book, addiction is the compulsive use of a substance despite ongoing negative consequences, which may lead to tolerance, and physicial withdrawal symptoms when the substance is stopped. By that definition the answer is no.

So if Cannabis is NOT addictive, as there are no physical withdrawl symptoms, then why is the NCPIC, saying you might need pharmaceutical Cannabis to get over it, and why would you. It is like drinking vodka to get over alcoholoism isn’t it?

Exactly, (you are clever) NCPIC receives hundreds of thousands of dollars in Sativex for trial use, $270k in 2011 alone, per the NCPIC.

What Good will  protesting do?
Maybe none, but there is a lot going on with the laws, in Victoria, other states, nationally and globally, so with promise of REAL Cannabis law reform ongoing in Australia miss information causes problems, confuses everyone from the media, the public even the politicians, and can stop any REAL progress being made for a long time. Effectively we are caling BS to the lies, we want FACTS not FEAR techniques to be used. There is still real education needed.

What Group or Political Party is Sponsoring This ?
None, We are just a group of like minded friends that work across and with all the Cannabis groups in Australia, to share common goals of fixing law reform

Is Protesting Legal
Yes we even have a permit.

Do You Hate the Police and Law Enforcement ?
We love the police, it is unfair for the police to be caught up in the confusion of the new laws that say some can be arrested, and others should not be, they are just doing their job. In the USA and the UK, law enforcement have been VERY instrumental in Cannabis law reform, and for offering their own views on why the drug wars have not worked, especially via LEAP (law enformcement against prohibition) http://www.leap.cc Sometimes there are problems with law enforcemnt potentially losing jobs, hours, or internal funding when Cannabis became legal overseas. We need to make sure that law enforcement is not penalised once they might be re-prioritised, to focus on other crimes including other drug crimes. This is why we need to fix the laws, and address things that hinder that process.

We hope to see you there.

Any questions, please leave a comment or email mailto://rally@loren.net.au