11 July 2017
Melbourne, Australia
OPINION – WITH A GOOD DOSE OF REALITY

Well, the top level story is pretty simple. The Australia government has created a new industry based on lies, deceit, and or lack of transparency. This has stimulated an industry wanting to capitalise on the new Australia Cannabis gold / green rush.

The only problem is investors risk losing greatly when global laws, like those in the USA, Canada, Jamaica, Portugal, Uruguay, South Africa, Mexico etc catch up to the Australian Government, with someof these bieng part of the Commonwealth of Nations.

Some are already in the Senate and due for a debate and vote soon, something the mainstream media (MSM) is ignoring.

Even perhaps the UN Acts that Australia is hiding behind are a risk, unlike the countries

mentioned above that either ignore the UN Acts, or simply make amendments to them so they can appear to comply to these now out-dated guidelines, that many have said for decades Australia is ministering on purpose.

Bubbles in a stock price can be based on vaporwave something that does not exist, but in Australia’s case, the Government has created the fake industry.

How Did This Happen? – 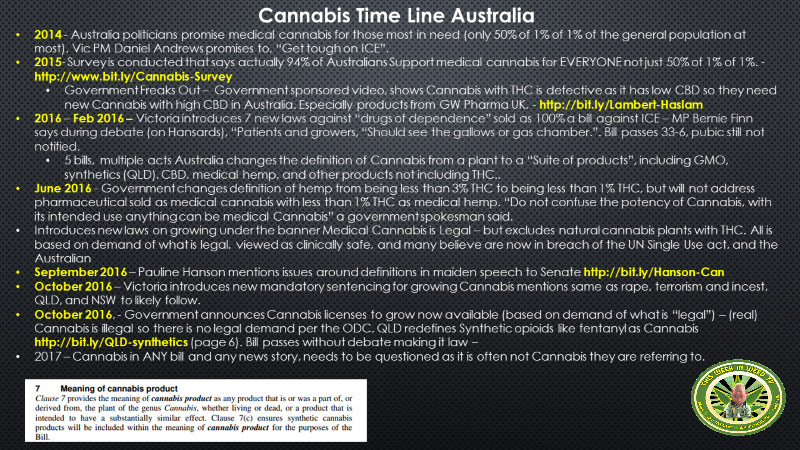 LICENSING – The bubble is formed – Under the new ODC (Office of Drug Control) 2016 guidelines, licenses are only offered where there is “demand” or for R&D. “Demand” is defined is where legal conditions are allowed for legal products. This means as there are no conditions where Cannabis with THC is legal, then per the Government, there is no legal demand for Cannabis with THC (real Cannabis). Again this means the only legal medical Cannabis is not Cannabis but hemp. When the ODC was asked by yours truly if it should not be called, “Medical hemp and not Medical Cannabis”  I was told in writing and face to face,

“The definitional problem is not about the levels of THC, but rather about purpose. If a crop is grown for medicinal purposes, then it is subject to regulation by the Office of Drug Control, regardless of THC level.” – Bill Turner ODC

This was then defined into law, in 2016 in various states.

THE BUBBLE GROWS – First government said they were now growing Cannabis, then they said they were testing the cannabis but to speed things along the would now import medical cannabis from Canada. So now any company, that has interests, in hemp, GMO, synthetics, CBD, or other pharmaceuticals that are now defined as medical Cannabis then there is a market for those products and the bubble is formed.

GOVERNMENT INTEREST AND DILEMMA – The pharmaceutical industry has been well embedded as part of government since way before the poppy industry. The current pharma industry turnover is estimated to be worth $AUD 28.5billion annually in 2017. With 90% of OTC (over the counter) sales and prescription sales being roughly 90% for pain, and mirroring the 90% use of Medical Cannabis in countries like Canada, USA & Spain. Further data shows that a growing amount of that 90% using Medical Cannabis for pain do so for arthritic pain, and that is growing also do to an aging population.

While the real Cannabis market is expected to be worth $9.6Billion in the USA by 2020 per investment group Archview as reported by the SMH, the Australia Industry Market is at great risk from medical Cannabis. Even the Prime Minister is touched by this as Mrs Turnbull is chairman of a biotech pharmaceutical company that one of their main money makers is a product to treat melanoma (skin cancer) which was the main reason Rick Simpson Oil (RSO) was initially introduced. RSO pretty much set the dosing protocol for Cannabis treatment with 1gm a day of cannabinoids being the suggested treatment. This 1gm would typically include 70% THC and 1% CBD, beginning life as a 15% THC to <2% CBD that when converted to oil becomes the 70:1 potency used in RSO oil for a full dose.

THE TRUTH IS STILL HERE – So now there is an entire industry formed and continues to form to support the needs of the patient that is allowed legal “medical cannabis” (but none with real Cannabis). Some estimate it will be 10 years before Medical Cannabis with Cannabis is legal others say it could be 12 months or less. With Australia’s first Cannabis bill in the Senate in NSW, if it becomes law, it means 2 important things.

Companies that have all their Cannabis investment eggs in the Australia basket are typically anti-cannabis but involved with CBD, synthetic, GMO, pharma, or hemp will see an instant impact when folks learn the truth. This happens when laws for real Cannabis are passed, realised when products sold as having THC and CBD imported from Canada are extreme low dosages 1/30th or less of an RSO dosage, thus costing $7000 a month, and $350 a bottle requiring a bottle a day.  The new products were hailed as being cheaper than existing products but fail to address their very low potency that is not a natural product.

Many Companies are having to invest heavily for 1 year licenses that need sometimes a 5 year ROI (return on investment) they are counting on renewing their licenses on an annual basis, but if demand is reduced by 95% when laws change or the public become aware, then that demand could equally be reduced by 95%. Many of these businesses are tied to investments and stock prices. Some companies will spend millions on security for a product that could lose demand by 95% in the next 12 months alone.

SOME STOCKS / COMPANIES POTENTIALLY INTERESTED IN THIS – TO WATCH

THE PHARMA MISDIRECTION – As we see new products meeting Australia standards entering the marketplace, it is worth noting the deception. One brand mentions their product is 18% THC and less than 1% CBD, yet does not get you high, how is this possible? A close look shows that the product is an isolate. It started life as Cannabis but then it is so diluted and dissected that a whole bottle is equal to 1gm or 1000mg of Cannabinoid. Real Cannabis products would be 30,000mg or 30gm per bottle with the dosage being 1gm a day or less depending on the condition. – Pharma and importers are failing to address this.

WHAT STOCKS / COMPANIES SURVIVE / DO BEST – If a law passed tomorrow, that legalised real Cannabis, then the demand for the current legal Medical Cannabis potentially goes away by 90-95%. What would survive would be those that had R&D cannabis in the ground or available, that people would want or those that survive offering full spectrum Cannabis that was CBD dominant, but with THC above 1%, an actual growing market trend globally.

Fixing The Laws – Supporting an existing Bill – Currently,  in NSW there is a framework Bill that legalises Cannabis for those with serious illnesses. It is a more relaxed view of the current laws supporting patients and not Pharma interests. It does not address the many problems in other bills but does a few smart things also. 1) Creates a legal  “demand” for real Cannabis products, vs pharma. 2) Protects patients, allows grow your own, make your own medicine, nominate a caregiver, or buy from the black market while supply is worked out. 3) Bypasses the process or need for the TGA for medicine, as the TGA is federal. 4) Creates a framework used in other countries but can be cut and paste into other states also.

Possible Constitutional Challenges – As most ignore the many new laws and bills against Cannabis patients, that passed in 2016, they even more so ignore, the 1974 era Royal Commission on Drugs. The writings of this focused that the UN Act, on Cannabis addresses the prevention of trafficking, not personal use or medical use. The summation was that Australia is hiding behind the Act and choosing to misinterpret and incorrectly enforce laws based on it. Now 43 years later we see Canada, USA, Jamaica, South Africa, Israel, Netherlands, Mexico, and others either amend the Act or ignore it. It has been suggested for some time that a fresh interpretation of C109 and c117 of the Australian constitution offers good directions in the lack of uniformity in laws and prejudice against what state or even how large you are in respect to saliva testing are all worthy of being addressed.

Targeting Legal Challenges – One of my idols, / mentors into Cannabis Law Reform is Keith Stroup NORML. He said it well, “It is about wins, small wins or big wins, you need to chip away at the laws”. Rallys and protests are fine but they are part of the journey, not the end.

To fix the laws, funding or crowdsourcing funding for those legal challenges if needed but they need to be about patient rights, not pharma rights and protection.