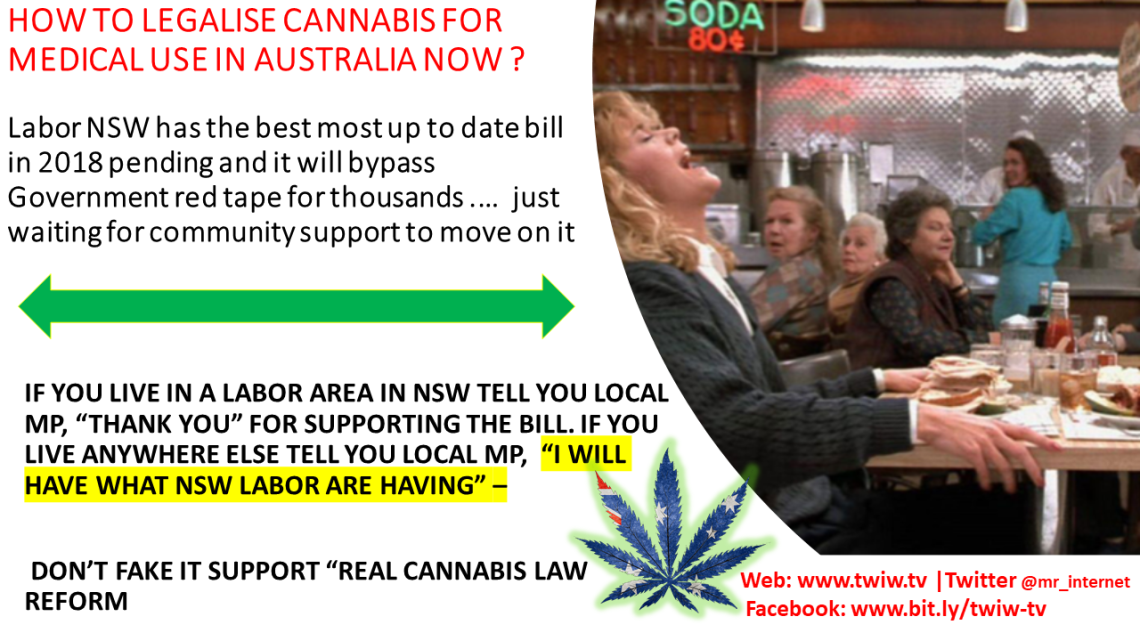 All Australians can help and we are calling on the Hemp industry to support legalisation of Cannabis for medical use  help also.

The licensing in 2016 that the government (odc.gov.au) announced and manages shows no legal licenses to make medical cannabis with cannabis (with THC). LIcenses are based on demand, of what is legal for medical conditions. The government has made it so that there are no legal uses for medical cannabis with Cannabis (THC), so no licenses for human consumption are allowed only R&D that has a 10 year expectation before patients would ever see it legal if ever. 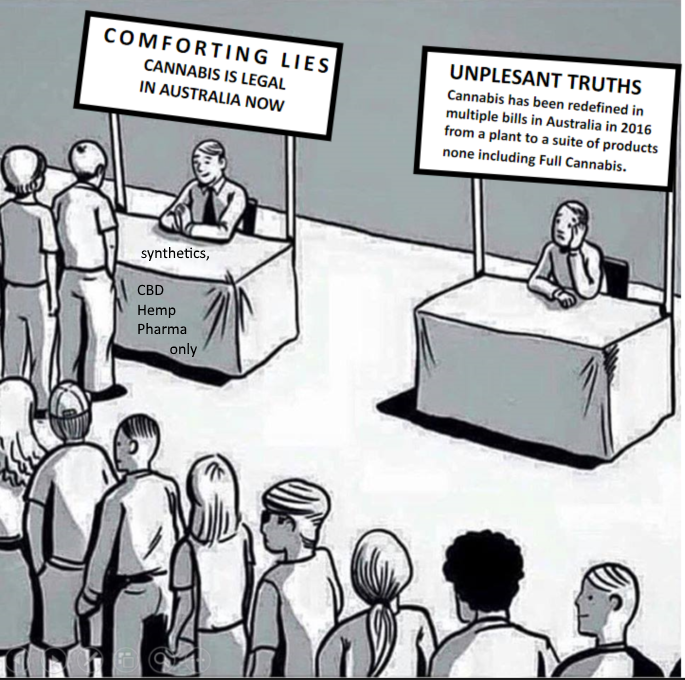 IT IS TIME – Australia

Removal of all prohibition vs Cannabis for medical use only.

In 1996, in a state in the USA (California) with a population matching that of all Australia 5m people voted and agreed to legalise Cannabis for medical use only. The decision was contrary to a previous vote that failed that looked to remove prohibition and make Cannabis legal for medical and recreational use. That same model has played out globally where votes to legalise recreational use have failed in not addressing medical use first. This was a compromise that worked. It worked in the USA, Canada, Israel, and around the globe. It is estimated 220m now have legal access to Cannabis in the USA and Canada alone. Those clinging on to removal of prohibition only are delaying legalisation for everyone by an estimated 10-20 years per various estimates.

THE LONGER VERSION & SOME EXPLANATIONS

None of the main stream media have reported on the facts of those statements and they are a LARGE problem. They will if asked, confess they report on the sound bytes not on the facts. In the now Donald Trump era in the media, facts appear to matter little versus hyperbole, and story impact. Even the PROJECT TV Show – when told that the government was up to in 2016,  and given contacts in government and even the Institute of lawyers to verify the new unpassed Bills in the senate in Victoria, issue refused to look at it stating, “It is highly unlikely to be true.” even when presented with the simple facts.

This has also played out well by the government, when they announced in October 2016, that  licenses for medical cannabis are also available. Again, the facts are quite different.

Consulting to Government on Cannabis Legalization in Australia-
When we, or others comment about consulting to government on the issue, it can take many forms. For most of us it is reading the new bills and laws and offering comment and maybe getting a few others to do the same hoping and praying the important parts get noticed and addressed before they get debated. There is normally months from when a bill goes beta as it were to get comment.

Sometimes this might mean being activists in the community (such as myself) contacted by an MP (for or against Cannabis) and asking for opinions on the subject matter. That alone can be ambiguous as those opposed might be looking for ammunition to defend against the argument, for others they might want due diligence. In some rare cases an open-minded MP might even accept an amendment to an existing Cannabis bill if they believe it only clarifies and doesn’t contradict the end game.  That is what we did in 2016, when we saw that Australia was changing the definition of the words “medical Cannabis”. We addressed the issue and suggested the EXACT definition of Cannabis be used, it worked slightly, but failed over all. However, the issue is there addressed in video, and on the public record, that there is a real concern about the first lie that has impacted Cannabis law reform most up to 2017.

WHAT IS MEDICAL CANNABIS? / WHY DID THAT DEFINITION CHANGE AND ONLY IN AUSTRALIA? – A one-time admired Cannabis activist in Victoria once said folks should, “Treat Cannabis like beer”, where some want homemade beer, others craft beer, others generic main stream beer, others don’t care just want beer, but if for medical use some might want to even buy that beer from a pharmacy if stretching the story.

But what if milk was defined as being “beer like”. Then every story on “beer” would have to be considered if it was about beer or if it was milk. This is what has happened to the words “medical Cannabis”

HOW DID THIS MESS BEGIN? –  It began in 1984, funny enough but in 2014,  politicians, were faced with parents with sick kids nationally,  that wanted the ability to use cannabis for medical use as they have been doing in Canada and the USA since 1996 (21 years)  The media caught it, and the politicians were forced to promise or resist that they would look at the issue when elected. When elected the politicians had to address the issue, then in 2015, a legitimate survey on the issue saw that 94% of Australians supported the use of Cannabis for medical use, http://bit.ly/Cannabis-Survey, those opposed to cannabis for medical use panicked. What happened next has impacted Cannabis law reform in Australia since.

IN FEB 2016- THINGS CHANGED For the Worse.  – , New laws against “cannabis” where Cannabis was not even mentioned, in Feb 2016, in State Victoria, a new bill sold as a bill 100% against ICE was really about Cannabis. To avoid early detection or any at all , the word Cannabis was replaced with an old reference to a group of drugs that cannabis sat in in called drugs of dependence.

THEN WHAT? – Quite simply, government decided to redefine the words “medical cannabis” . Globally, medical cannabis just meant real cannabis used for medical purposes. Many were not using high CBD cannabis yet, so that was more medical. Also different strengths of THC in Cannabis might make one strain / cultivar better for some medical conditions than others. Then there were oils, and edibles, where only used for medical use legally they were medical cannabis. The pharmaceutical industry and even those in the hemp industry and those opposed to cannabis for medical use applauded the new definition others not so much. The end result was medical Cannabis (only in Australia) would vary in definition state by state but mostly meant ANYTHING that acted like cannabis was now “medical cannabis”. This has then gave itself to many implications 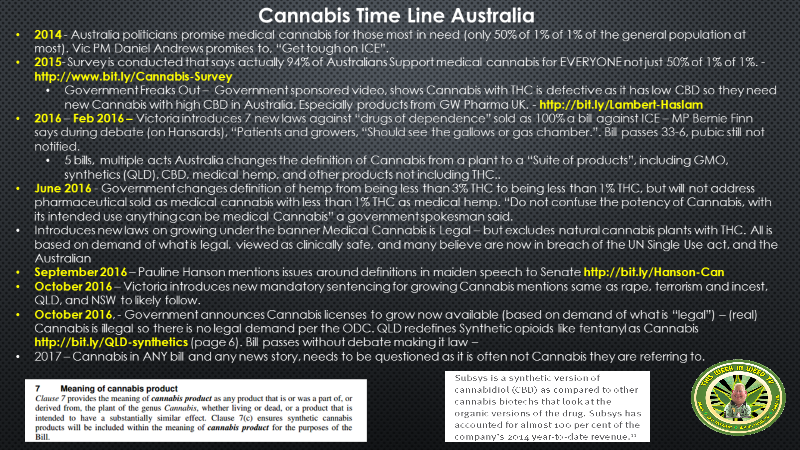 Rallys, protests, and BBQs to legalise cannabis even the mardi grass in NSWand ALL of Australia, do NOTHING unless they end in the support of a specific new bill, or legal challenge. To date NONE of those things have happened. To date all the exisitng bills have been BS and made things worse for pateints, and those wanting law reform.

That has to stop if folks want things to be different we have to do something different.
Now a Cannabis friendly bill is on the table for 2018, if supported Cannabis can be legal in a year or yes. But public support is needed as there needs to be some folks to cross the aisle to vote yes when they might otherwise vote no.

The Political Logistics on Legalising Cannabis
As mentioned we have seen 10 bills in 2016-2017 producing 20 or so new laws all against Cannabis though some were supported by activists and activist groups without listening to the possible negatives of the bills. The new bill based on the foley bill in NSW in 2017, looks to bypass all the new red tape, and allow patients, and caregivers to provide medicine legally even buying from the black market. At only 17-20 pages, the bill is a framework bill in that it does not address all the mess of the last 10 bills. It sort of skirts around them so as not to get buried in a cumulative effect of 10 bills of crap already approved by activists, and government.

The one and a half minute video explains it well –

The bill in a bit more detail – (a quick read)

Why this Bill?
A bill to legalise Cannabis needs to do a few things.

Be simple
Not Get buried in the baggage of all the other previous bad bills
Protect patients
Protect Caregivers
Allow legal access to full cannabis medicine not pharma
Allow for the first time a legal demand for medical cannabis that actually includes cannabis (with THC). Currently no licenses are available as medical cannabis (with thc) is deemed not legal so no demand so no licenses (but for R&D that will take 10 years).